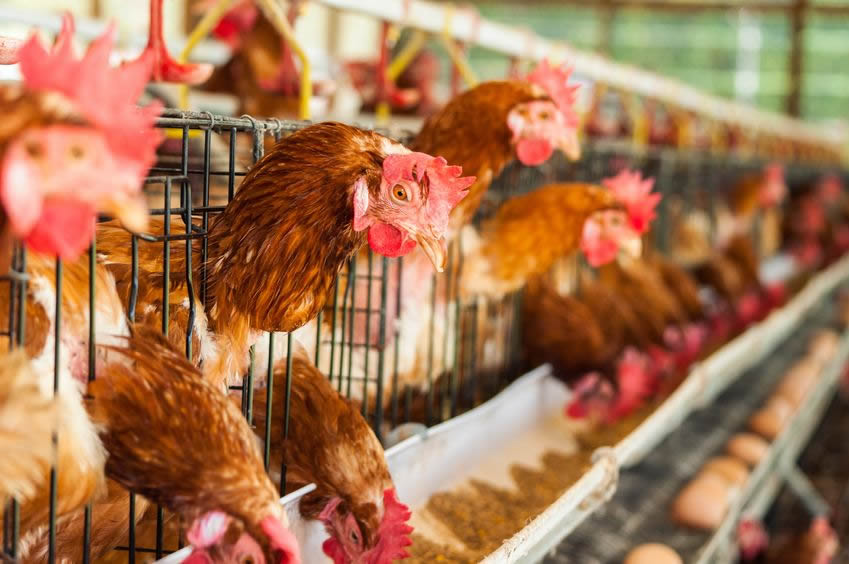 It's no secret that meat comes from animals, but to this day, many people do not understand what factory farming is and how it affects both animal and human welfare.

Simply put, factory farming is the practice of raising as many animals as possible in as little space as possible, to maximizing output and profit at the expense of animal welfare and the environment. These methods became more common after World War II, and have steadily replaced more traditional family farms. The result is that each year, millions of animals–mostly chickens, turkeys and pigs–are crammed into huge windowless sheds where they are barely able to move for their entire lives.

Few laws regulate the care of animals on farms, and many are specifically exempted from state and federal cruelty laws.

The vast majority of egg-laying hens are housed indoors, stacked in “battery cages” in which up to a half dozen hens are crammed together in each one, unable to stretch their wings or walk. The wire cage floor allows waste to drop thought onto other birds, and causes severe pain and injury to their feet. Hens are kept in the dark much of the time to reduce cannibalism caused by overcrowding, and are deliberately deprived of food and water for weeks at a time to force them to molt and start another egg-laying cycle. Once they stop laying eggs, hens are slaughtered for meat and meat by-products (chicken soup, etc.).

“Broiler” (meat) chickens are likewise housed indoors by the thousands, and must constantly inhale ammonia from their own waste. At hatcheries, workers cut the tips of the newborn chicks’ beaks off to prevent pecking caused by overcrowding. In the sheds, farmers discard dead birds daily – just the cost of doing business. The lights in the chicken sheds are often kept on most of the time to encourage the birds to eat more and grow faster. By the time they go to slaughter, many birds have broken bones and missing feathers; their injuries are never treated.

According to the Georgia Poultry Federation, poultry farming represents 47 percent of Georgia’s agriculture, with 102 of the state’s counties producing more than $1 million worth of chickens and other birds. As of 2014, Georgia produced more metric tons of “broiler” meat than the entire countries of China, Brazil, India, Russia and Mexico.

Turkeys raised for meat are treated the same way, and have been bred to have unusually large breast “meat” that makes their bodies too heavy for their legs; many become lame before they are sent to slaughter.

According to the U.S. Department of Agriculture, as of January 2016, there were more than 92 million cattle being raised in the United States. Most cattle start out grazing on grass (on both private and taxpayer-supported public land) before being sent to feedlots to be “finished” by eating corn, which creates the marbled fat in their flesh desired by consumers.

Dairy cows are mostly raised outdoors, but must constantly be impregnated in order to produce the milk meant for their calves. They have been bred to have unusually large udders, which results in frequent infections and thus treatment with antibiotics, which remains in their milk. When their bodies become too depleted to create milk, they are sold for meat; most hamburger meat comes from “spent” dairy cows.

The female calves are kept by the dairy to replace their mothers; male calves are taken away soon after birth (which is traumatic for the cows and calves alike), and they are either raised separately for a few weeks and then killed, or are put into small “veal crates” where they are unable to walk or turn around, thus producing the pale flesh known as "milk-fed veal." Ironically, calves raised for veal are not given their mothers’ milk; they are fed an iron-deficient formula that makes them anemic.

As with cows, goats raised for milk must give birth regularly, and their male offspring are slaughtered for meat (most Americans don’t eat goats, but many people from other parts of the world do). Goats are often dehorned soon after birth, without anesthetic.

Pig farming has changed dramatically over the past several decades, going from outdoor enclosures to indoor sheds where these large, highly intelligent animals are kept in crowded pens or narrow stalls for their entire lives, and go crazy from being unable to move. Breeding sows are kept immobilized in gestation crates for months on end so they don’t accidentally roll over on their piglets in close confinement. Pigs often have their tails cut off (without anesthetic) to reduce injuries, and are subject to very rough and sometime sadistic treatment.

Despite what agribusiness companies say, animal abuse at factory farms is common, not the exception. It is inherent in a system that puts profit over welfare. Dozens of undercover investigations by animal protection groups have exposed horrifying evidence of abuse and neglect on a regular basis. What few government regulations exist do not prevent or punish the routine abuse of farmed animals.